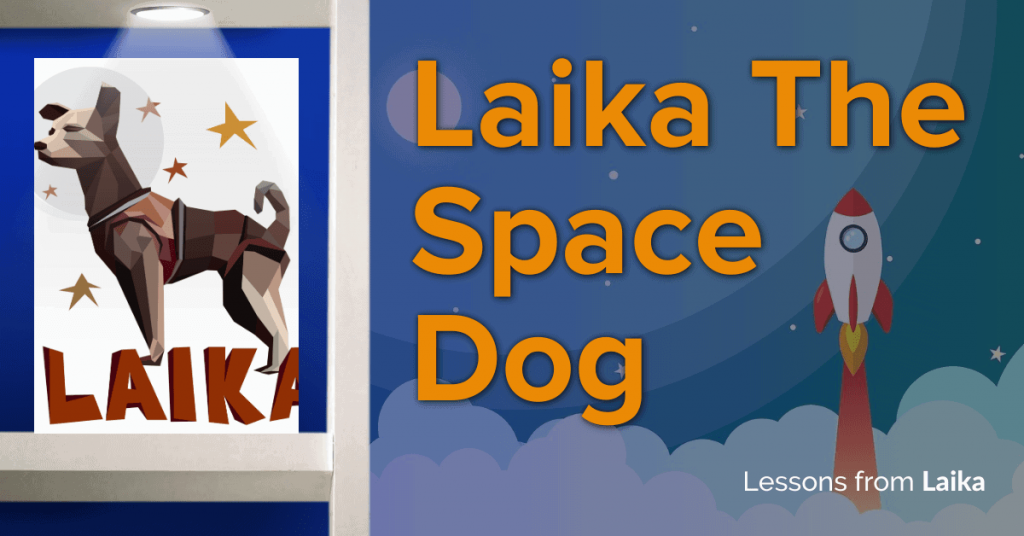 For many years, animals have suffered at the hand of man’s incessant needs for wealth and power. Using the premise that what is considered as man’s dominion over the earth, he doles out unquestionable suffering to himself and to mother nature. This of course includes the animal kingdom. However, at what cost do we destroy a soul with the premise that we are bettering humanity through needless suffering.

It is no secret that the team at Scout’s love nature and even though we are in the business of controlling bugs, there's always fine checks and balances that we adhere to, and we are mindful of what we do and the laws of mother nature. We love nature so much, and we especially have a heart and deep love for our four legged friends. So it was a shock to me when Meaghan messaged me and exclaimed “Hey you got to read this story about Laika.” Who’s Laika?

As, my mind wanders to a reminiscent vision of a Lakota Indian. I believe that I am about to be told tales of brave Indian warriors and their hunting prowess. I wait for that revelation. How wrong I was. “That’s the space dog who was sent to space to die.” Meaghan told me. Nothing could have prepared me for that. Why on gods’ good earth did we have to send a little dog to space to die when there were so many other avenues we could have taken. As dog lover’s we understand how our furry friends become more than family, and they feel our fears and our emotions within themselves as well as their own. They are unconditional with their love, but we are conditional with ours. I had to dig deeper into the story. I share it here for all you dog lovers to remember our four legged friend and teacher.

On November 3rd 1957 Russia stunned the world with the Sputnik mission. She sent the craft into space, and on board was a mix breed stray dog -Laika. She was the first animal to orbit Earth in a spacecraft. However, Laika was not the first animal in space. The USSR and the USA used animals for many years by putting them on top of rockets and into space.

In the early days of rocket science, no one knew how weightlessness would affect animals. Therefore, why not use animals other than humans, after all they are expendable – right! It was mainly dogs, monkeys and chimps that were sent forth. They were supposed to be the tests that proved we could send man to space and bring him or her back safe. As a consequence, animals became the testing currency. As a consequence it was animals that suffered, with no real understanding of the pain they were going through and under the control of man’s imbalance needs, we sent them to die in the name of progress.

Look At Her Eyes

Laika’s image says it all. Dogs have a sixth sense and if you look deep into the eyes of Laika, she knew what was going on. One can only surmise what emotion was being felt by her. She was chosen for a reason. She was a mix of Huskie and Spitz. Her stray life on the streets made the Russian scientists consider that she would be able to take the conditions in space better than other animals under consideration.

As I mentioned, she was not the only canine chosen. She and her peers began a training process under the scrutiny of the Russian scientists who kept her in small capsules and fed her specialized food. Many of the other dogs were put to the side- they did not cut it. However, Laika did and she was bound to die in the name of progress.

Now whilst this may sound like the Russian scientists had no heart, it is clear that there was concern for her life. However, one has to wonder if that concern was a standard feeling throughout the hierarchy. Nevertheless, one scientist ‘Vladimir Yazdovsky,’ who knew of her impending demise took pity on her and took her home to do something nice for her, in his own words;

“I wanted to do something nice for the dog,” he later recalled.

The scientists had also planned that she would have a painless death and that she would pass peacefully. At least they did consider this, but what of the dog’s emotional state. We know that our beloved pets feel emotion and can also show emotion. As Laika entered into her confined living capsule before the launch, which was fitted with sensors and cleaned out with an apparatus to remove waste, we know that Laika was terrified. Those sensors sent back information that showed that her heart rate shot up, and she was showing signs of physical and psychological stress. According to an article in the Smithsonian who reports on the reality of her journey and death;

A Word From The Scientist

“Her heartbeat rocketed to triple the normal rate, and her breath rate quadrupled. The National Air and Space Museum holds declassified printouts showing Laika’s respiration during the flight. She reached orbit alive, circling the Earth in about 103 minutes. Unfortunately, loss of the heat shield made the temperature in the capsule rise unexpectedly, taking its toll on Laika. She died “soon after launch,” Russian medical doctor and space dog trainer Oleg Gazenko revealed in 1993. “The temperature inside the spacecraft after the fourth orbit registered over 90 degrees,” Lewis says. “There’s really no expectation that she made it beyond an orbit or two after that.”

Was this really necessary. I don’t think so, what did it really gain – nothing! Is it not reality that no matter how much of an olive branch they put forth, the fact remains they had power over life and death of Laika, and she suffered. Was it necessary to make her suffer just to prove we could man a spacecraft.

Many tears have been shed for Laika and I believe that to this day many tears are still being shed. Perhaps when it rains so heavily in one part of the world, we can consider that Laika is raining her tears upon us and sharing those tears for us because she can see how we still make the wrong choices. How we still cause needless suffering and how we need to look into the eyes of our beloved pets and understand they feel like we feel, and we have a choice to do what is right or what is wrong. Every day we should think of Laika, for I think she may have been a great teacher of hidden lessons for us all – to learn how to live whilst making the right decisions.

At Scouts, we learn her lessons, and we support our local animal shelters because we know every time it rains we feel the pain of Laika the Space Dog and Teacher. It is your choice to learn the lessons from this little space dog. Do the right thing.