How Dangerous are Hornets? 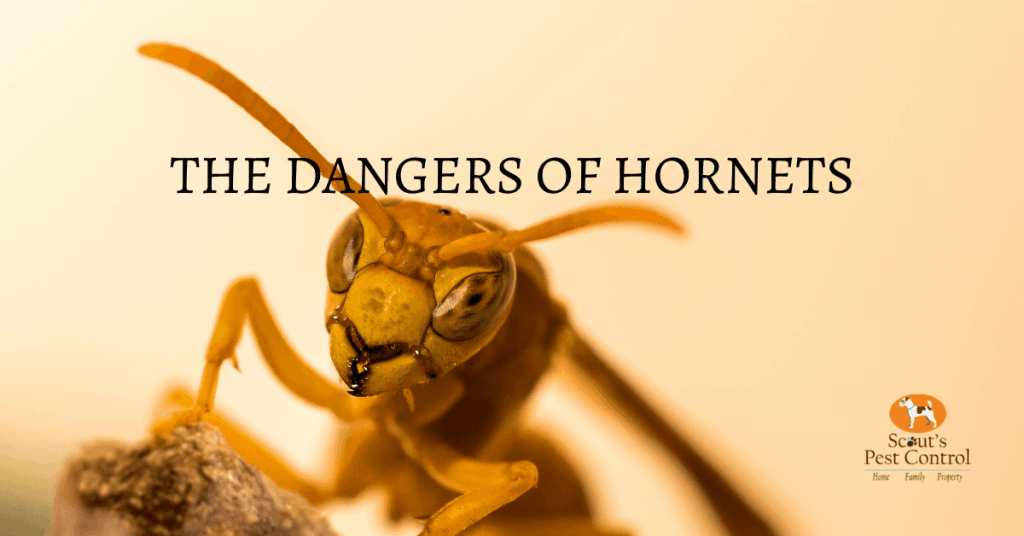 Bees, wasps, and hornets are common throughout the United States, and everyone has, at least once in their lifetime, been stung by one of these insects. The stings of hornets, bees, wasps, and even some ants can cause pain, stinging sensation, redness, and itching. Although getting an allergic reaction is uncommon. Nevertheless, it can be serious if the person is suffering from underlying health conditions. However, recently, the US has been invaded by a species known as giant hornets that you may have found out about in the news. They are not in the South yet, but never say never. So we thought it was time to educate you a little about the dangers of hornets.

Giant hornets existed in Asia and were introduced to North US by humans. Now a huge population of hornets is also common in the USA. These insects feed on honeybees and capture the dead prey for their hives where it is fed to the young hornets.

These hornets’ have been the cause of up to 50 deaths a year in Japan and are now within the US. There have been no sightings of Giant Hornet’s in South Carolina, but of course, we have others that you need to know about should you come across them in your environment.

Hornets are usually non-aggressive insects, and they seldom attack humans in normal conditions. However, when they feel threatened or if someone is in the proximity of their colony, they may attack them.

They are natural pest-killers as they feed on aphids and honeybees. Some researchers have found them to be shy and peaceful creatures who mind their own business and stay away from humans and trouble. They avoid conflict by staying away and attack humans only when they absolutely must.

Where Do They Live?

Hornets, like most nest-building insects, like to live in high areas such as on treetops and hollow tree trunks in the wild. In residential areas, they build their colonies in attics, under roofs, decks, sheds, and AC holes in walls.

This means they can start living close to you and even settle on your property. Most of the time, you won’t even find out that you are living with hornets under the same roof. However, as soon as you spot them, it is recommended to call Scout’s Pest Control.

Their population grows quickly, so chances are they will build their colonies larger in a relatively short space of time. And aside from high ground, some hornets can build their nests on the ground. Secure spaces on the ground are empty garages, a basement window's shed, and even an abandoned rodent burrow in your garden.

A hornet looks like a giant wasp that is 2-4 inches long. They have 3-inch-long wings and a yellow and black strapped belly. If you suspect that you have a hornet nest around the house, take a photo from a safe distance of the insect and send it to us.

Avoid removing a hornet nest by yourself. As we mentioned earlier, these peaceful creatures can become very dangerous when they feel they are under attack. You can even get chased by hornets, and they can be deadly when they are collectively protecting their nest. They don’t go easy on their target when provoked. Don’t poke a nest or use DIY methods.

How Dangerous is the Hornet Venom?

A small hornet sting can be fatal, although the likelihood of getting stung by a hornet can be very rare. The reason why hornet stings are more dangerous than wasp and bee stings is that, just like the large size of the hornet, it can transfer more venom through its sting. They are known to transfer more venom per sting than any other insect that stings. Hence, just one or a few stings can be dangerous and life-threatening in certain situations.

Recently, the stories of hornets in the US started trending on social media. They were aptly named ‘murder hornets, and though we do not have them here in the South, it is not impossible that they may one day arrive. The sting from one hornet is enough to keep you in pain for a few days. A researcher who was stung by a hornet revealed that the severe pain lasted 2 days and interrupted his sleep. Now he is a trained venom researcher, so imagine the consequences for your children.

But What About Giant Hornets?

Giant hornets can sting multiple times with their giant stinger in their defense. With more venom being released through stings repeatedly, only 10 hornets are enough to kill a 150-pounds animal if each of them stings the animal ten times.

The Asian giant hornet venom contains acetylcholine and histamine that are responsible for pain and itching. Another chemical, kinins, can dilate blood vessels and even break down blood and muscle cells. Many people will often mistake a hornet for yellow jacket’s — don’t make that mistake. In an upcoming article, we will deal with yellow jackets.

Are Hornets and Yellow Jackets the Same?

No, they might look very similar, but the main difference between a yellow jacket and a hornet is the size. A hornet can be a few inches long, but a yellow jacket is slightly larger than a housefly. Yellow jackets, commonly known as wasps, are also extremely dangerous as their sting can invoke severe reactions. They can also sting and attack multiple times. However, yellow jacket’s often get mistaken for hornets by homeowners, and the two are entirely different.

How to Stay Safe?

The best way to avoid getting stung by hornets is to not provoke them in any way and always stay at least 3 meters away from their nest. If you are living in South Carolina and notice a hornet nest on your property, book an appointment with us for safe and complete removal. You can contact us through our Scouts Pest Control website support, by sending an email or by calling us. Do not attempt DIY solutions to remove Hornet's Nests.